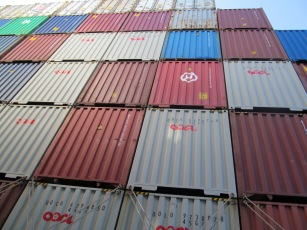 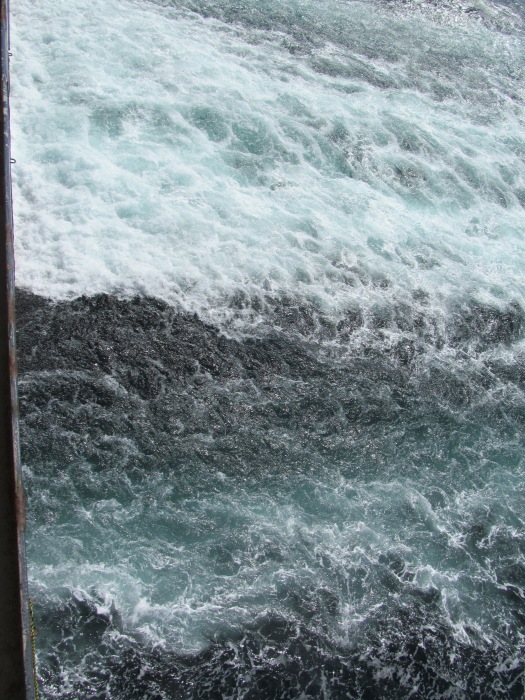 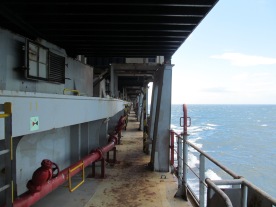 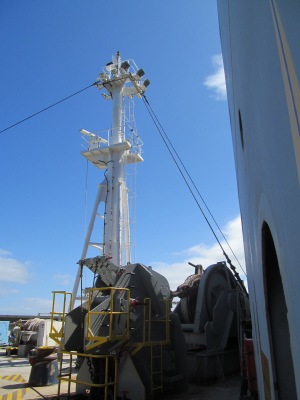 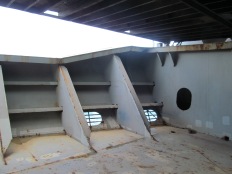 I started the day with coffee and croissants with Nutella. The sea is flat and we are cruising about 16 knots, making good time. We are in a two-day space of open and empty water, between the inlands and the mainland.

We should hit the 200 mile NOAA zone sometime late tomorrow; this is where we need to transition from low grade, high sulfur bunker fuel to low sulfur diesel. This is to comply with USA regulations on pollution control. We have the highest standards in the world and I wish everyone did, the sulfur and CO output from the bunker fuel is almost twice what the diesel is. Of course, the cost is half as much on the low-grade bunker fuel. I did have a chance to see the purge tanks for the bunker fuel today and it is not pretty, this is where the sludge is burned off or captured before the fuel can be burned in the engines. This is a dirty business and the world lets it slip through the cracks, one of those by products of changing the world. Like I said before, this industry changed the entire world much like autos did in the 50’s. They were horrible for the environment too but the world pushed on while the economic benefits outweighed the ecological realities. Too much of the world is in need of economic enlightenment to call out this industry just yet.

As indicated above, I did get my engine room visit today. I spent about 2 hours down there, it was very interesting to a geek like me. There are 5 decks of equipment and the main engine room. The amount of energy to support all the systems is incredible, the five generators and transformers could power a city. There are several key elements to the systems, water systems for equipment/engine cooling, fresh water conversion and pressurization to operate the ship needs and deck maintenance, electrical generation and transformers for various voltage requirements, the engine and output systems and the HVAC system for the ship. There are more and many complex systems that support the major ones I listed and the ship below the deck is my kind of place. There are 8 crew members on duty there at any moment of operation.

There is a nice tool crib, spare parts inventory and a small but capable machine shop. They get by with an engine lathe, a drill press, a gas welder and a wire feed welder. Then there are lots of grinders and tap/die sets. When you are thousands of miles from nowhere and you need to fix something, you need to do it yourself. I was surprised at how sparse the spares were and how simple the machine shop is. Of course, they carry spare cylinder liners, spare piston sets, spare output bearings and things that are necessary to keep the engines operating at all times. These are huge pieces of machinery; the pistons are about 4 feet in diameter and the output shafts are 5 feet in diameter with bearings to match. In fact, the output shaft is over 100 feet long to the props.

The electrical systems are intense, not only the generation and conversion but the panels to manage all of it and then the alarm systems and operating systems. I would say at least 30% of the engine room is electrical and all that electrical equipment needs to be cooled with HVAC and contained rooms. The engine systems run on 660V, condensers and HVAC run on 440V and all the panels and the ship electrical systems run on 220V. At home in the USA, almost all our home current is 110V, save the dryer or the welder or heavier generators. The systems here use some serious energy. There are step down transformers that take the generated 660V down to 440V and then down to 220V, each time being distributed to the correct systems required. There are 2 electrical engineers to manage all this, amazing. You just hope something big never goes wrong, at least I would.

The entire engine system is made by Hyundai, the same company that built the boat. This is almost beyond belief, since everything requires incredible amounts of forged and cast parts that are designed just for these machines. The amount of tooling, development, testing and manufacturing cost just is beyond comprehension. The number of dollars is staggering. The fact that only a handful of companies in the world can do this is proof the massive scale. This is the same Hyundai that now sells pretty good cars around the world, they are a huge conglomerate company that makes ships, elevators, escalators, automobiles, farm equipment, and on and on. Kind of like Mitsubishi Heavy Industries in Japan but I think on a modern scale. This ship is 11 years old and is in remarkable condition, cleaner in the engine room than in most of the ship. I mean if the boat stops, everything stops so this is where the attention is at peak alert.

What impressed me the most was how smooth she runs for as big as the engines are. The axial runout (amount of movement from center) on the main shaft was 1.4mm! That is incredibly small movement for such a big machine. The engine covers about 300 feet of space and the main shaft and crankshaft have less than .05 runout. That is 5 hundredths of an inch. Incredible. Not without a lot of lubrication and temperature control. They use a LOT of lubricant. They use a LOT of fuel. There are 8 fuel cells and they hold enough fuel to sail around the globe without re-fueling. The fuel needs to be pre-heated, purified so all the solids are removed and then put through an exchanger to become fuel for the engines. It is nasty stuff. Really nasty stuff. The sludge tanks need to be cleaned and purged every two weeks. If they ran straight high grade fuel, that would be every four weeks or more.

Unfortunately, they discouraged photos, I get it, so I was only able to sneak one of the cylinder bays. I wish I could have taken more. There were windows in the crankcase that allows visual of the crank and screws that run the engine, all being bathed in fabulous gear oil. I am such a geek. There seems to always be an alarm going off, this is normal for a ship. Alarm codes simply tell the crew to check, they don’t always mean an issue but rather to confirm that all is being watched carefully. Most of the alarms are for temperature or oil levels, some are coolant and electrical also. The alarm station is in the control room inside the engine room so if no one is in the control room, the alarm will sound until someone makes it in there and shuts if off. This is a control procedure so a crew member cannot override the alarm.

If I worked on a ship, this is where I would work. I love it in there, it is like the most fabulous garage in the world. It is noisy but only when you are in the engine room proper or the stern where the output shafts exit the hull. I would not call it loud but without ear protection you would probably end up like and old rock and roll musician.

I could go on and on but I am the only one who was curious and that has been satisfied.

Lunch; an interesting Salmon “tart” which is kind of like a quiche I guess, Thai beef with veggies over rice and pineapple under a crème Chantilly. Jenna; can we learn how to make Chantilly? I think I love it.

We gained another hour today, we are now only 2 hours behind Cali!

I finished a Patterson novel, Along Came a Spider, an early 90’s piece. Typical who dunnit. My mom will want to know.